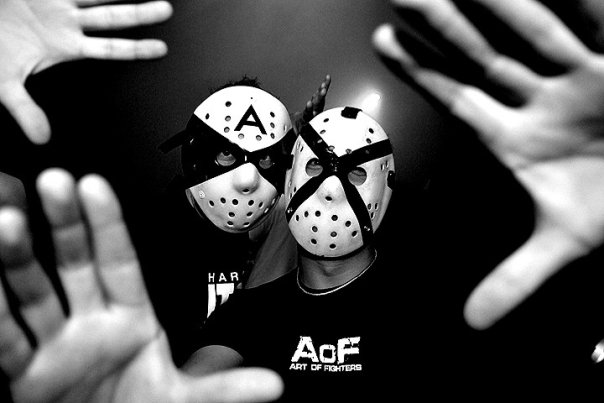 Art of Fighters started out in Brescia (Italy) in 1997, from the idea of 3 guys: Cristian Nardelli, Matteo Pitossi and Luca Lorini. Thanks to FastTracker, 3 years of try-outs, tons of rejected tracks and the big help of the Stunned Guys, the first record The Beat Can't Change came to life in the year 2000. In 2001 their second E.P. Artwork appeared in the stores, definately putting them on the map of hardcore. Their tracks appeared on many compilations and their fame began to expand. In the end of 2002 they decided to switch FastTracker for some more professional equipment: a few months after that, Earthquake was released. It was a big success; the record was played by most of the big names of all the nations. Thanks to this and their amazing live-act, the Art of Fighters were asked to perform on some of the major parties in Europe: Hardcore Nation (IT), Resurreqtion (NL), Hardcore Gladiators (DE), Street Parade (Swiss), Masters of Hardcore (IT), Evolution (Swiss), SummerRave (Spain), Rave The Universe (IT), Death Experience (Austria), Goliath (Swiss), Navigator (NL) and Hard Halloween (Spain). Just published but already played a lot is the latest work of this Italian trio: Game Don't Stop. And this is only the beginning... and they rock with there K0cks out They are also producing experimental hardcore under alias Meccano Twins. website: www.artoffighters.com
more

TRACKS BY ART OF FIGHTERS