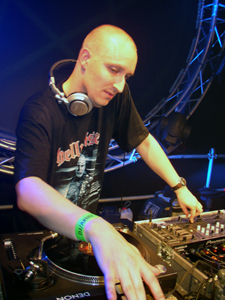 Dj Dione started his musical carreer at the end of the 80’s as a dj at a local youth-centre, playing mainly hip-hop, hip-house and early house-music. In 1991 he and some friends started organizing house-parties in the Bubbles in Lelystad, something they continued doing throughout the beginning of the 90’s. He soon met up with some other house-minded people in his hometown, who had just started a radioshow on the local radiostation, and they invited him to take part in their radio-programme. One of those people was Dj Unity (R.I.P),who later became his partner in crime as an organizer, and with whan he also worked together as a dj-team. In those days house-music evolved into different styles, and hardcore-house became popular. Since Dione had always liked and played the harder styles, it was a small step to become a hardcore-dj. Dione then started producing his own music with some of his productions released at Rams Horn/5th Gear under the names Dj Dione, Whousers and Kire Ampy. In a short time his tracks could be found on over 50 compilation cd’s and two albums ; one with hardcore, the other with more housy and techno stuff. Because of his radiowork he was asked to do a radioshow on New Dance Radio, a commercial radio-network. Here he presented the (award-winning) radioshow called ‘Hakkeuh’, which became Holland’s most popular hardcore radioshow. Meanwhile he started producing for ID&T, the organization that also had introduced him and Dj Unity as a dj-team on bigger events like Thunderdome, Earthquake and Mysteryland. Here he released his first 12” vinyls on Deathfly records and later on Thunderdome records, with tracks such as ‘Ready 2 rumble’, ’Energy’, ’The atac’, ’Darkness & Brightness’ and ‘Mayhem’. Also he teamed up with the Solid Rocket Boosters, a vj-team that did shows and presentations at museums and art-galleries. With them he played hardcore-sets on some unique locations such as museums and galleries in Finland, Estonia and Latvia. He also produced some soundtracks for animations they did, which were shown in famous museums all over the world. When ID&T stopped with hardcore at the end of the 90’s,he went to produce for Megarave records. His first release on Megarave was ‘Sick confusing m.f.’s’, followed by famous tracks like ‘Oh God’, ’Pain ‘til I die’, ’Just kickin ass’ and more recently ‘The way is shut’. Also he did some collaborations with hardcore icons like Dj Paul, The Headbanger, Dj Distortion and Dr. Z-Vago and he has an important part in the succes of the ‘Hellraiser’ releases on Megarave records. Rige, the company that owns Megarave records, started a new label called DNA for the more darker and underground sounds of hardcore and Dione introduced the name E-Noid for his tracks on the DNA-label. E-Noid became, and is still, one of the most important producers for the DNA-label, with tracks like ‘Act of aggression’, ‘Liquid super D’ and ‘DNA theory’. His latest alter-ego is S.R.B, which means Solid Rocket Boosters, as a tribute to the vj-team he used to be in. He uses this alter-ego for his terror and speedcore productions released on the TIT-label. Nowadays his name can be found on the line-ups of all the big events all over the world, from the USA to Switzerland, from ‘Hellraiser’ to ‘Dominator’. By many he is considered to be one of the leading hardcore-producers and his dj-sets get great responses from die-hards everywhere.
more