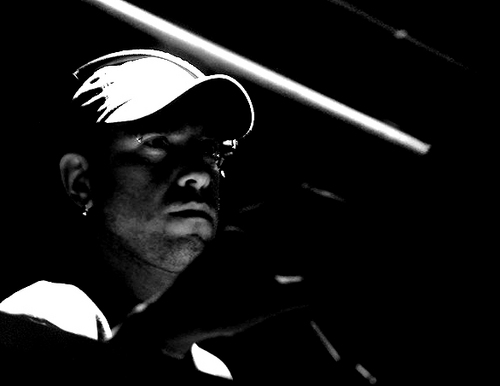 The name Nosferatu is a project name Patrick van Kerckhoven came up with for an early release on Ruffneck Records together with F. Henderson. The alias was later used as a project name by Van Kerckhoven and Erwin van Kan. The latter is now the sole user of the monicker. Because Van Kan has produced the bulk of the Nosferatu material this entry will be about him. Born in The Hague on the 16th of September 1973, Erwin van Kan started his career back in his infant-years. Jumping on a piano, smashing it, and then falling on a table with his head, leaving a nasty mark on his eyebrow! Maybe his Hardcore-style was already born? :) About 12 years ago, he began spinning music with a tape-recorder and some sort of turntable. Cutted, pasted, and recorded several mix-tapes during that time. After a couple of years he managed to build his own studio. He bought some equipment, like a small sampler, and he produced several tracks, not released on vinyl, but just for friends... Then, when he spinned as a DJ in a coffeeshop, he managed to produce a demo-tape which he gave to a friend, who had some connections in the record-business. Then he had the opportunity to release his first record : 'All that she wants' on Bünkor Beats-records. At that time he was booked at several small parties, and some of them were very underground. For some people in his country, they know wich underground-party we mean: The massive 'squat'-party, downtown The Hague! With lots of other DJ's like Virus, the english DJ Raw (not the mc), and many more... DJ Mystic (Nosferatu's first DJ-name) spinned for over 7 hours non-stop that night! After several years of working (more as a DJ, than a producer) he bought some new equipment and made a new demo. One day DJ Ruffneck was performing at a party, and Nosferatu gave his demo to him. Then his career really started; he got an appointment with P.v.Kerckhoven (Ruffneck) and Andrea v.d. Rhee from Cardiac Music bv. and he became part of a great recordcompany! 'Inspiration vibes', 'Dangerous Battle', and many more were made by the hand of Nosferatu. When he later handed Ruffneck a demo his career slowly rocketed and he is now one of the most popular and successful DJ/producers in the Netherlands.
more