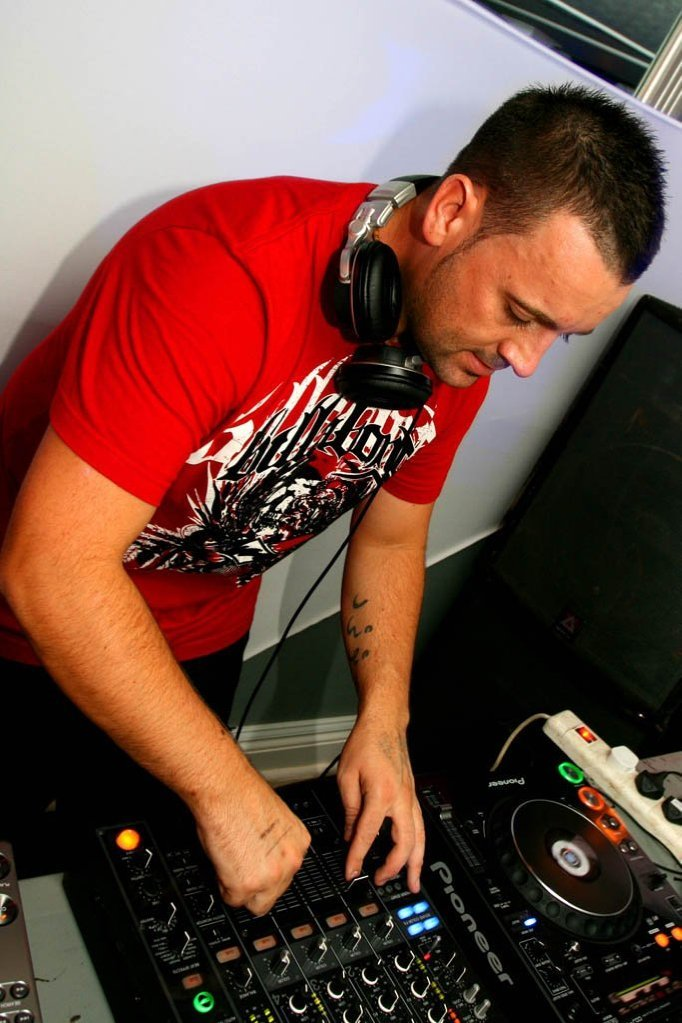 Music has always been a big part of joey's life. Aided by his dad at the age of 13 he started to learn guitar and piano, he then took this on further at school developing his skills. Rave culture also took hold of him at an early age. Still in primary school he was mesmerised as acid house swept across the uk. Once at high school and running with an older group of friends, the excitment of rave, the music, the parties, made him immerse himself in the culture. At the age of fifteen he and friend Darren Grant, helped by darren's older brother Robert starting putting on their own under 18's events in their home town on moodiesburn, near glasgow in their local community centre. The event was first called "THE TECHNOZONE" but was later daubbed "TLM (the lethal mix)" after their DJ/MC partnership name which was emblazoned on the front of their flyers. Joey started out MC'ing at these parties while Darren manned the dex. Their "TLM" events were a huge success from the very first one and joey had caught the performing bug! Throught the mid to late 90's joey concentrated on MC'ing although he did DJ, but more as a hobby throughout this time. After playing at their own event, joey and darren then moved to a local nightclub @ cumbernauld airport to do another under 18's event as resident MC & DJ. It was playing at this club he was asked to MC for "tiny tunez records" live P.A. showcase and played MC'd for them at numerous venues across the uk. After playing a gig at "THE CORE" @ the calton studios in Edinburgh with the P.A. he enjoyed the club so much that he started going every fortnight and after bending the promoters ear for a while got a go on the mic. His first set @ the club was MC'ing for the mighty BASS GENERATOR, and he was to stay resident MC @ the club for its duration. When the night finished @ the Edinburgh venue and the promoters teamed up with "NORTH" who promoted their legendary nights in stoke, to start a joint venture @ visions in rosyth (formerly nosebleed) joey was asked to be resident MC there too at "THE CORE" & "NORTH" among other events in Scotland he MC'd for DJ's including... LENNY DEE, BASS GENERATOR, MANU LE MALIN, RADIUM, SHARKEY, KEVIN ENERGY, SCOTT BROWN, MARC SMITH, SCORPIO, THE PRODUCER, VORTEX, and MARK EG to name a very few! In the late nineties, moving into the millenium joey became disillusioned by the music in the hardcore scene and sought solice in other forms of music like techno & trance. As these scenes did not use MC's joey got more serious about DJ'ing and honed his skills on the decks. He also done an HND in music technology @ college. Up to 2002 joey played mostly trance and techno and dabbling in production at home. After meeting Thian Brodie @ a gig he was playing at the arches in glasgow, Thian booked joey to MC at his Hardcore event in leeds (UNITY) where he got a chance to hear some of the new hardcore that was being produced and played out @ raves south of the border. The production had came on leaps and bounds since hardcore's inception and it was this new sound and love of the hardcore crowds that made him decide a career in hardcore producion was for him. Joey moved to England in 2003 to be closer to the action and holed himself up in his studio, determined to make waves in the hardcore scene. After just 2 yrs producing the new stlye of hardcore, joey gained his first release on HARDCORE COLLECTIONS part of the nu-energy collective. "Wide Awake" was his first track followed by a host of others on labels such as... HCC, RELENTLESS, QUOSH, MAXIMUM IMPACT, NEXT GENERATION, FBI, REDEMPTION to name a few. He has also featured on albums such as HARDCORE HEAVEN volumes 1, 2 and 3. HARDCORE NATION 2, 100% HARDCORE and HARDCORE REUNITED. Joey has upcoming releases on a plethora of labels including releases on his and Kurt's LETHAL THEORY label. With a string of releases under his belt and even getting several track played on radio one Joey's gig diary has been filling up rapidly! playing at venues across the uk including, VIBEALITE, HTID, UPROAR, REZERECTION, TWISTED & BRAINFIRE, BACK TO THE FUTURE, TIDY WEEKENDER, etc, etc and with his first gig abroad in Toronto he is now an international DJ too! check out where he'll be next in the bookings section of the site and find out about all his tracks in the releases section. HARDCORE 2 DA BONE!
more