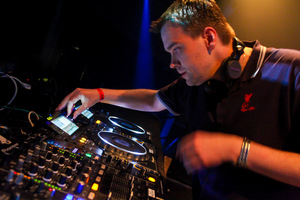 Lunatic & Miss Hysteria born in Leidschendam in 1978 and Amersfoort in 1983 are the male/female DJ duo responsible for a string of successful performances at high profile hardcore venues throughout Europe.DJ Lunatic started behind the decks fifteen years ago so his knowledge of hardcore music and technical ability are first class. He has played together with Miss Hysteria to several crowds on parties like DefQon, Project Hardcore, Nature One, Nightmare Outdoor, Harmony of Hardcore, Ground Zero, Earthquake, Hellraiser, Hardcore 4 Life, Hellbound, Army of Hardcore and many many more. Also they played in countries like The Netherlands, England, France, Italy, Germany, Spain, Switserland, Luxembourg and Belgium. His style is Darkcore/Hardcore everything that's hard and kicks ass!!! He is responsible for several releases like Undisclosed, PUSSY, Apologue, Life before Death, Double Bind and Just 4U in cooperation with his partner in crime.Miss Hysteria, real name Malin, started her music carrier near 2000. Her personal choice goes out to dark melodies and atmosphere and is not afraid to think outside the box. Miss Hysteria is known for her versatility as a deejay, has established a reputation for showcasing her signature "Dark" style and energetic mixes. Next to being part of the dj-duo Lunatic & Miss Hysteria, she appears solo as dj and producer. She's know as one of the few female producers who actually makes her own music by herself. Examples of solo projects are tracks like: Damn the Dark, Worst Possible Misery for Everyone, Escape, Exorcism of Yahweh, HooDoo, Dark Matter, Death before Life and Particle Physics. These tracks often characterize themselves by a theme or a deeper layer as making music is a way to express a message or emotions. Next to the hardcore gigs, she also appears also solo on several parties as Lucy Furr to play a Drum & Bass set.
more