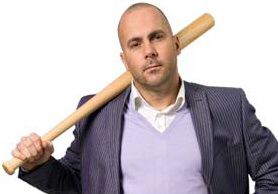 A perennial favorite as the craziest DJ in the world according to fans, Mental Theo has been a part of Hollands dance scene from the heady days of disco through to the global clubland of the new millennium, with temporary pit stops covering, Acid, Electro, Happy Hardcore, Hardcore and the immense rave revolution of the middle '80s & late '90s. Mental Theo was born in ‘s-Hertogenbosch, The Netherlands in 1965, Theo began DJing family get-togethers at the age of ten, selecting records from his parents' stack of soul 55s. He was buying his own records soon after, (album ABBA) and owned his first pair of turntables at the age of 14. The rest of his teens was making spare money at any job he could get to sell records, though Theo studied electrical engineering in college, he quit after several years and began working various jobs until he could become a full-time DJ. Mental Theo had followed the musical trends from disco to rare groove on to hip-hop during the late '70s and early '80s, he even worked for a hip hop magazine, but the introduction of house into Holland during the middle part of the decade convinced him that he had found his niche. His reputation bloomed during the gabber house explosion of 1990-1993; Mental Theo played on wicked party’s together with dj Rob Janssen from Parkzicht Rotterdam. Later on at world’s biggest events : Fantazia (Scotland), Mayday (Finland), Love Parade (Berlin), Thunderdome (Holland), Newyears Rave (Australia), Goliath (Austria),Streetparade (swiss), Decibel (Holland), In Control (Holland), Mistery Land (Holland), Resurrection (UK), Overdose (France), Limelight (USA), XTC (USA) and many more, that signature built him into one of the top DJs of the early '90s. In the early '90s Theo worked for Arcade Records and created the biggest Hardcore compilation in the world ever, (Thunderdome), later on Theo signed a production deal with Master Maximum Records, a label together with Charly Lownoise. Later on they scored world wide hits with there debut single, "Wonderful days" and sold millions of records. Eleven hit singles followed. After the hit singles, Mental Theo started his own television production company and produced several tv shows for MTV and TMF in The Netherlands. 6 years of crazy tv, wicked shows and mostly outragiest items made Theo cool down and go back to his music.
more