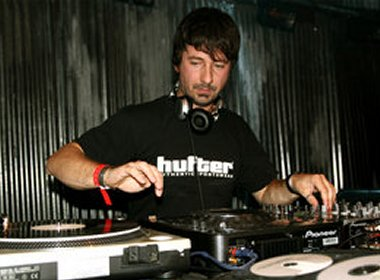 Putting the Peaky in pounding, mister funk it up himself creates the ultimate hard techno vibe of explosive energy on the dance-floor. After a short and stirring career in techno, Peaky Pounder (Jeffrey de Gans) came into contact with The Third Movement in 2002. His vision and style of music was so unique that TTM was instantly the ideal home. With a background in techno, a fictitious Finnish appearance (he is truly dutch, life's in The Hague) and a teckel named Kurkuu, Peaky created a raw and powerful blend of percussion, beats and distortion. A funky sound, positive and yet so strong, there was no genre to blend it with. Traveling the edges of techno and industrial as well as incorporating his typical funk into the mix, Peaky Pounder is one of those artists who managed to define a new sound. His first release (‘Hermosto’, 2002) at the Third Movement label was unique and ground breaking. When the vinyl was released it was clear that Peaky’s sound had evolved into something so hard and pure that it created appeal with both techno and hardcore audiences. Pushing his own limits with further releases every year like ‘Fasttalking’, ‘Viimeinen’ and ‘Positiivista’, Peaky Pounder continued to develope his music. The definitive acceptance of the Peaky Pounder vibe came with the release of his first album in the summer of 2006 titled ‘Kippis!’. An album featuring both the dancefloor funk which Peaky is known for and deeper more break-beat related experiments in electronic music. Next to being a gifted producer, Peaky Pounder is a solid experience behind the decks. With a long international career as a DJ in the books, Jeffrey de Gans has proven himself to be quite the mix-master. Peaky Pounder delivers his sound to the dancefloor with a positive twist. Mixing his productions together with the latest in industrial and the oldest in oldskool, each Peaky set has driven the crowd to the roof and beyond. Responsible for several incidents of dancefloor madness throughout Europe, Peaky Pounder is the ultimate funk it up to any sound-system! Celebrating special moments - like his album release - Peaky Pounder also unveiled a live side of his music. With a limited number of performances, these live-acts have proven to be something quite special. Every act featured a different twist: from orange and green balloon madness to a shot of retro interactivity. Any requests? Pushing his own limits, with a strong line of releases till date, Peaky Pounder has grown to be recognized as a innovative and artistic producer. Some pounding movies for a quick impression: Peaky Pounder live @ club r_AW 10-06-2006 http://www.youtube.com/watch?v=IKMyhwTZc34 Peaky Pounder live @ Mysteryland 2003 http://www.youtube.com/watch?v=XGM6FHYQWqU Peaky Pounder playing Fasttalking at Club r_AW http://www.youtube.com/watch?v=5qOhzQwJLP8 Peaky Pounder vs r_AW @ in Qontrol Rai Amsterdam http://www.youtube.com/watch?v=hxLFpycRePE Peaky playing Viissi at promo party in HMH 24-03-2007 http://www.peakypounder.com/movies/peaky_pounder@promo_hmh.avi Peaky playing Viissi at mysteryland 25-08-2007 http://www.youtube.com/watch?v=LfvMbztuJHs
more