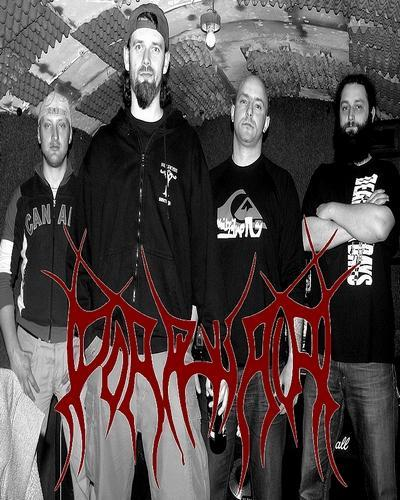 There are several bands named Porphyria: 1.) Porphyria (Pol) from Poland was formed in the beginning of 2001 by Buz-git, Godek-git, Set-dr, and Luki-bass/voc. A year later, in the spring of 2002, Kris joined the band as a secondary vocalist. In the summer of 2003 after a couple of successfully played gigs, the band decided to go to The Screw Factory Studio in Debica to record 12 tracks for their first demo/promo CD titled „Mayhemic Blast”. Later that year, Porphyria signed with the Polish label Redrum666 which resulted in the release of „Mayhemic Blast” in form of a split CD with death metal band, Souless. Unfortunately, at the end of 2004, Set left the band and took off for Ireland. A few months later with no drummer to be found, the rest of the band called it quits. 2008 brought new hopes for Porphyria when Buz and Godek met up with drummer Kaho and bassist Mento, two former members of the death/black metal band Merot, and they all agreed to resume what began back in 2001. So as not to waste any more time searching for a new vocalist, Buz decided to put aside his guitar to take over the vocals. New material is nearly done and is scheduled to be recorded in 2010. http://www.myspace.com/porphyriagrind 2.) Porphyria was created towards the end of 2003 with a lineup of merely a drum machine and 2 people. Eventually, the project evolved into a precise five piece machine based out of several states in New England (ME, NH & MA). The band has played well over 200 shows all over the Northeast US (and Canada) and as far as Ohio in a brief 3 years. In the end of 2005 they released the 'What No Eyes Could See' EP. Recorded by Ken Susi (Unearth) and mastered by Nick Zampliello (The Red Chord, Isis), the EP is five songs of brutal technical death metal that will leave some serious bruises. The band has played with national and international acts such as Suffocation, Cryptopsy, Cattle Decapitation, Despised Icon, Through the Eyes of the Dead, Beneath the Massacre, Vital Remains, Ion Dissonance, Mortician, Immolation, Malignancy, Incantation, Dehumanized and tons more. Fast forward to October 2007, the band has decided to go on an indefinite hiatus. Look for new projects to emerge soon. http://www.myspace.com/porphyria
more