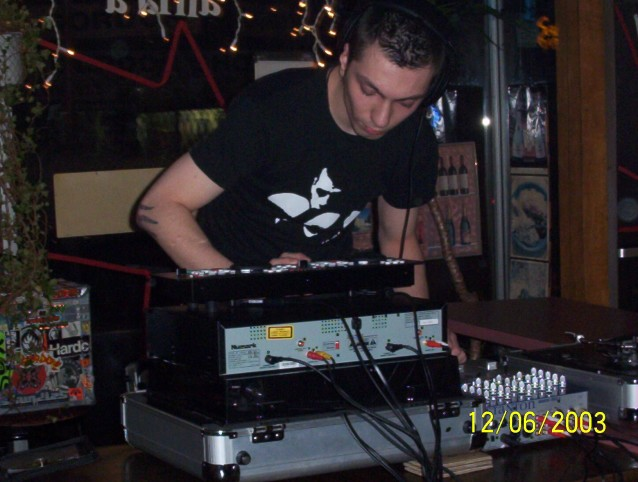 Beginning his journey at the age of fourteen, Adam immersed himself in a multitude of art forms. From full time musician and live performer to graphic, and multi-media designer. This young creative artist is well talented and willing to learn more everyday. Adam's teenage years were spent honing his musical skills in his studio with a band as lead singer but he found that it was not his path and slowly moved away from a band formation to becoming the solo artist currently known as Razor Edge. During this time Adam discovered the power behind studios and Computers, the creation and formation of new sounds, that were next to impossible to create without the power of a computer chip. This allowed Razor Edge to be born and take music to the next level of Destructive sound that Adam was seeking in his creations. In 2003 Razor Edge launched his Inaugural project called Death row a launch party that was held in bar/club in one of Toronto, Ontario's many facilities. Due to its success of the first party a second party was planned in summer of 2004 this pushed Razor Edge more into success more then he could imagine. With parties and such under his belt he went further into the Hardcore scene with releasing his First track Chewing On The Razor Under the guidance of Justice (A. Van Zuylen) and Drokz (Richard Koek) Label Pendeho Records ( http://www.pendehorecords.nl/ ). To date Razor Edge has Produced and Distributed 6 tracks with Pendeho Records, 6 tracks for DNA records, 2 tracks for Bass Machine Records and 2 tracks for Rave'O'Lution Records. Locally in Canada Toronto to be specific like much of the Hardcore scene it is considered strictly underground and cast out of the Toronto Rave Culture Free parties Obscure Locations (Warehouses. Under City Bridges, Middle of Forests), the music does not appeal to everyone and everyone within the Toronto Hardcore scene is a tightly knit family Proud of Razor Edges accomplishments here and now abroad. Razor Edge has now slowly begun the journey of playing for the International community in countries like the Netherlands,Poland,and Belgium. 2007 will also bring fourth a new venture for Razor Edge and those close to him in the premiere of his Record label Ellerium 115 Records. Still in its early stages, Elerium has already introduced itself to Canadian community in December of 2005. Razor Edge and his friend and former colleague, Laf-O of Smerk :^) Records threw down one of the most successful underground hardcore parties in recent History of Toronto. With world class talent preforming and many locals (some not so local) Razor Edge Stomped his foot into ground and broke open a new door for Toronto's Hardcore scene. What is next for Adam Edge and His Razor Edge Persona? we are not so sure. with successful releases under his belt his fourth coming tour and solo debut and Label launch we can only predict for now that this wont be the last stop on Razor Edge's train. website: http://www.razoredge.ca http://www.bugscrawlingoutofpeople.com
more