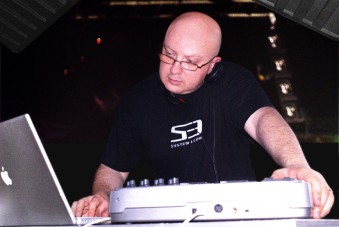 Piero Scarato, aka System 3 (and the man behind names like Max E-Crew, Crime Lab, Deevoid, etc...) was born in 1976 in a small village near Verona, Italy. At the age of five he started playing with his father's expensive Fostex reel tape recorder and listening to Kraftwerk's "Trance Europe Express" vinyl album. For a few years he studied classical piano and singing. His real musical career started in 1991 when he started DJ'ing and playing with an Akai sampler around in small parties and clubs. In 1994 he released his very first record, Vitamin Pills "Saturn Rings" with D. Baraldo (with whom he started this adventure) and DJ Ottomix (aka Joe Inferno), creator of many international hits. From then on, thanks to his strong friendship with another renowned musician and producer, Mario Percali, he started making music on a regular basis, releasing tracks of different genres. In early 1995, inspired by huge names like Marc Acardipane, the Stunned Guys, Claudio Lancinhouse and many others, he signed a contract with one of the best hardcore labels: D-Boy records. System 3 started releasing strong music, including "Keep on fuckin'", "Da Beat", "The Devil Inside"... and following that success two new pseudonyms were created, Max E-Crew and Crime Lab. System 3 played in large parties like "Thunderdome in Italy", "Extreme" and more. After D-Boy record's experience System 3 moved to The Saifam Group and started Aeon Tracks, releasing hits like the classics "Like a shot" - "Smash It", etc... In 2001 D. Baraldo left the project, and Piero Scarato became a solo artist. He moved to Germany for about 2 years, were he met very interesting and inspiring people; there he created new pseudonyms to work with, such as Deevoid, Alex Bunkerfreak, The Embalmer, Viewfinder... Since then many successful tracks have been released and a brand new studio was built. After a long period of absence from the hardcore scene, in 2007 he was contacted by DJ Dano himself, who decided that it was time to bring System 3 back on stage, starting with a couple of clubs in Amsterdam and one of the best parties ever: the Ground Zero Festival. In 2009 System 3 was asked to produce the two Ground Zero 2009 Official Anthems for the Forest Community, aka Early Rave area, which were printed and released by Rige Entertainment later in 2009. Through the years many big artists appreciated the quality and innovation brought by this name into music. This has been proved by System 3 being included very often in some of the best selling and most important compilations worldwide, giving System 3 nicknames like "the italian stallion" or "the floorfilla". Today System 3 is back with strong new productions, with artists like DJ Dano, The Sickest Squad, FrazzBass... releasing on labels like Mokum, Industrial Strength Records, Dutch Gabber Network, Audiogenic. Twice in 6 months, he also has been selected as the "Hardest Record right now" by BBC Radio 1 (UK). System 3 performs DJ sets and live performances, based on a MacBook Pro and a few controllers with Logic Pro and Live - oldschool and mainstream hardcore in your face!
more