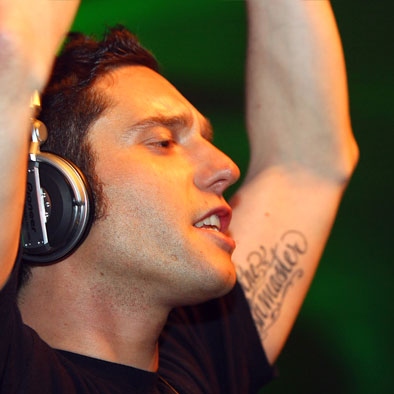 Fulvio Stramaccioni aka the Wishmaster started his DJ career in the underground scene in Rome. After performing on several illegal raves he started to create his own music. In the year 2000 his first record "Let's Run Riot" was released on D-Boy records. After this first smashing release he became a resident artist at the famous club "Gheodrome" in Rimini (Italy). After 5 successful solo releases on D-Boy records he collaborated with artists like Promo and Nosferatu. After his period as a D-Boy artist he produced two solo E.P.'s for Choose or Lose records. One of his biggest hits "Style" was released on this label. In the same period Fulvio collaborated with Life-Runs-Red (50% Armageddon Project). The track "Tales From The White Widow" was released on Traxtorm Records. From now on The Wishmaster is producing for Bionic Recordings. His first release on Bionic was "Extrema Ratio" and was released in April 2006. His stunning live-act brought him to raves in countries like: Holland, Italy, Switzerland, France, Belgium, Russia & Scotland. The Wishmaster is one of the few real live acts in the scene. Besides a live-act the Wishmaster is a skilled DJ.
more

TRACKS BY THE WISHMASTER